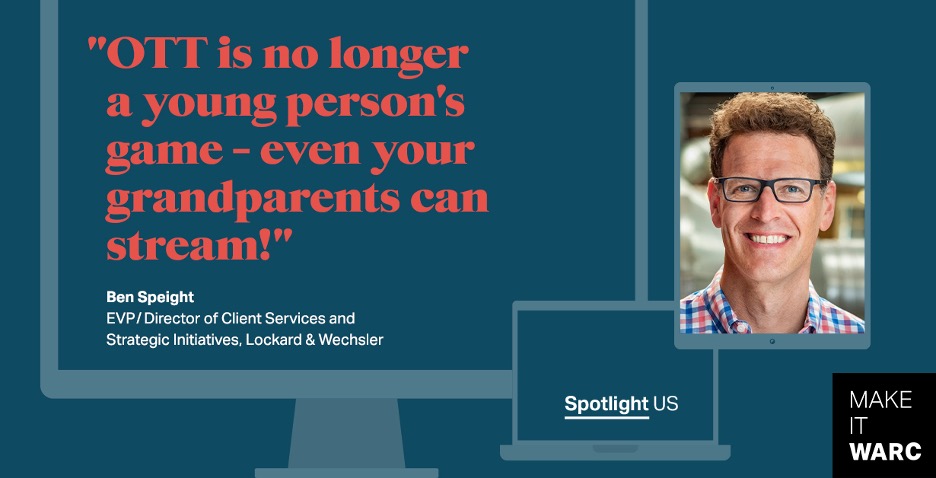 As viewership across ages and demographics, shifts, the pandemic highlights the need for more balanced media plans

We’ve always been told that change is the only constant in life. That couldn’t be more accurate when it comes to TV advertising. Over the past decade, U.S. advertisers have seen TV grow from the many traditional linear broadcast networks, national cable and syndicated selections to an ocean of emerging digital, streaming, over-the-top (OTT) and connected TV (CTV) options. We have all seen Netflix, Hulu and Amazon become vital content destinations and there is no sign of a slowdown.

Within the past 18 months, three of the major U.S. broadcast networks – ABC (Disney+), CBS (Paramount+), NBC (Peacock) – and many others — have introduced their own streaming platforms, all with immediate and significant subscriber growth. HBO Max launched last May and is projecting 120-125 million subscribers in just four years, a goal that will be easier to achieve now that it has announced a cheaper, ad-supported version it expects to launch in June. It’s not hard to see Netflix and others quickly following suit, given how expensive compelling content like this is to produce.

The pandemic added fuel to this TV migration; it also profoundly changed the landscape. As we all know too well, we watched tons of TV during the pandemic, and consumed it in a much more diversified way. Those of us who hadn’t experimented with the litany of apps on our Smart TVs were suddenly testing the waters by watching shows like “The Morning Show” on Apple TV or “The Queens Gambit” on Netflix. All we had was time on our hands to discover the vastness of what we could stream.

Streaming activity is gaining traction globally, but in the U.S. it’s absolutely massive. According to Q4 2020 data from AudienceProject, 80% of Americans stream, and almost a third don’t watch traditional TV at all, streaming instead. Looking just prior to the pandemic and projecting through the end of this year, OTT-type video will add 33 million subscriptions or expand by roughly 15%, according to eMarketer. These aren’t millennials or Gen Zers, the majority of new subscribers are from age 40+. They’ve taken hold and become much more comfortable with OTT and streaming video. It’s no longer a young person’s game — even your grandparents can stream! First, they found Facebook, now they’ve found streaming. What’s next? Tik Tok Plus? It’s too soon to tell, but it doesn’t seem all that farfetched.

Prior to 2020, we would have said the shift to streaming options is mostly driven by demographics: the Millennial/Gen Z cord-cutters are most effectively reached via streaming, whereas the 35+ demographic could effectively be reached via traditional linear TV.

Since that’s no longer so, the question becomes: Where do TV advertisers go from here? How do we effectively distribute media investments while fulfilling our awareness, reach and ROI goals? Do we abandon the “old” traditional TV experience in favor of the incoming new crowd?

The answer, as with everything in life, is balance. While OTT and connected TV are becoming more critical in driving hyper-targeted reach and engagement for the cord-cutters, the younger cord-nevers, and even baby boomers, we can’t forget about the big elephant in the room – traditional linear TV.

Even as streaming expands in both raw numbers and demographics, linear TV still has a hold on people, especially for certain types of programming. Case in point, Oprah’s live interview on CBS with Meghan and Harry delivered 17.1 million live viewers, and the number rose to 21.3 million when Live+3 delayed viewing data was added. That’s an enormous number of impressions that can’t be ignored. It’s a similar story with the cable news networks, which all soared to record viewership during the pandemic and last year’s Presidential race – and viewership always returns with breaking news cycles.

Pricing can’t be ignored either. When you add up all of those linear impressions, it’s an attractive CPM compared to connected or streaming CPMs. While OTT CPMs have become more favorable as the streaming audience grows and TV networks have begun to package linear and OTT together, there is still plenty of work to be done here. This is particularly so for performance-based direct-to-consumer advertisers, where CPM is critical in delivering customer acquisition costs. It’s a much easier sell for brand advertisers with a higher tolerance who are looking for pure reach and no immediate ROI.

When it comes to accountability, OTT/CTV offer advanced segment targeting and precise measurement for DTC and acquisition-based advertisers – a huge advantage in understanding consumer behaviors and media accountability. Linear TV, measured more broadly through various real people-measured viewing tactics, is changing too. Nielsen is going all in on “Nielsen One,” a single measurement platform that will roll out early 2022; it will help quantify the “all-in” cross-platform viewing experience. Meanwhile, Smart TVs are providing new means for linear targeting.

As these solutions emerge, we can’t lose sight of this migration in viewership across platforms, and must balance the media plan accordingly. Understanding your objectives and target segments will help bring media diversity to the plan and a responsible allocation of your TV investment. Traditional TV can be used to provide that quick, top funnel reach, and allow for extension and more efficient use of the marketing spend. But if you are not extending your message to the growing number of streamers, you are really missing out on those “hipster” grandparents and many other qualified prospects.