Newsroom/ Delivery Session Interview with Dick Wechsler
Back to Newsroom 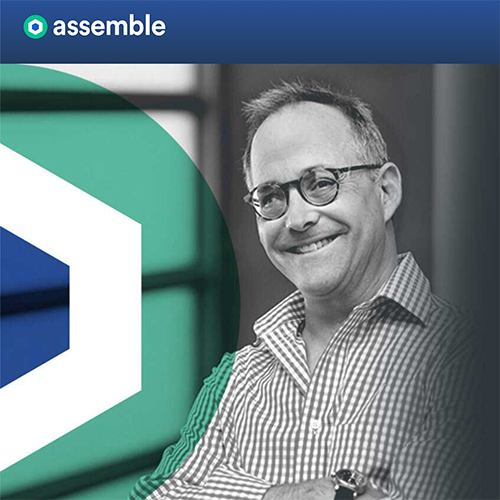 From a unique partnership to a thriving direct marketing powerhouse — Dick Wechsler took a leap of faith 30 years ago, and has since grown Lockard & Wechsler into one of the largest privately-owned direct marketing agencies in the world.

And despite the challenges of working remotely for the very first time, they’ve achieved their best year ever. So, we sat down with Dick to learn more about his journey as both a small business owner and an industry thought leader, as well as the major comeback direct marketing continues to make in our digital world.

Tell us about your background prior to starting Lockard & Wechsler.

Dick’s prior life before Lockard & Wechsler actually had very little to do with marketing at all. In fact, fresh out of Connecticut College, his career started in an art museum. “I was actually an art historian and secured a volunteer internship at The Museum of African Art in Washington DC,” Dick explained. “Three years later, I went to work as a national publicist at National Public Radio, eventually ending up at Ketchum Public Relations in NY. Then there was my good friend, Arthur Lockard, who was 30 years my senior and had a small direct marketing agency. He basically asked me if I wanted to join him as a partner. So, I kinda fell into it with no experience whatsoever. But I just had a natural understanding about what direct marketing was all about, and the rest is kinda history. In 1991, it was just Art, me and an assistant.  Now there are over 100 of us.”

And the story of how it all came into place is a pretty good one too. “I’ve always been a writer. At the time, Art and his wife were sharing a summer house with me and my family. I was writing a speech for the Chairman of Aetna Life and Casualty; Arthur started reading it and was like ‘you’re a really good writer!’ The direct marketing business was all copy driven — and still is. He asked if I’d consider joining him and taking it over in five years. Without really thinking it through, I said ‘ok, let’s do it!’”

“I was a SVP at Ketchum PR at that time and in charge of a number of significant practices. I remember when we finally decided to make the move, I had just applied for a mortgage, so I couldn’t give my notice here until I received a commitment letter from the bank,” Dick laughed. “I ended up leaving Ketchum on a Thursday, we closed on the apartment we were selling and closed on the new house Friday, moved into our home Saturday, celebrated my birthday Sunday, and Monday, I was off to work for myself. I really had no idea how I was going to pay the mortgage, having drained every penny for the down payment and moving expenses, but ultimately, it worked out.” I think we can all agree with that.

What are some of the skills you’ve developed while growing a small business into the largest privately-owned direct marketing agency in the world?

With the remarkable ability to say that Lockard & Wechsler has been profitable every month they’ve been in business, “growing pains” certainly isn’t the first phrase you’d use to describe the company’s journey. But there are still challenges every business owner faces along the way — which Dick knows well. “An early and ongoing challenge I had to face was how hard it is to hire someone when you’re not sure how you’re going to pay them. We were small, and there was just more work than I could handle.  I quickly learned that when you hire good people, the organization and revenue grow, and profitability follows. I had to become comfortable with growth — because otherwise the work would have never gotten done. Our philosophy is you do what your clients need by identifying and developing those capabilities. You have to allow yourself to grow.”

“In regard to the practice itself, I honestly believe that we do it as well, if not better than anyone else. That’s reflected in the fact that many clients have been with us for decades. And most of our growth now comes from client referrals. We’re blessed with client and staff stability. I have team members who have been with me for 25 of the 30 years we’ve been in business and a huge group for people here for 10 and 15 years. If you work for a successful company that continues to grow, then people have the opportunity to grow with the organization. We believe that if you give people responsibility you have to give them authority, and we’ve provided them a place to do the work they love to do, so they stay and they grow as professionals.”

And one final tidbit that Dick has learned along the way is the importance of delegating — which he says many people struggle to do. “When you delegate, it’s important to allow that person to do it in his or her own way.  If you expect them to do it the exact way you would, you only limit the opportunity for it to be done better. You have to step back and let people find their own course. The senior editor at National Public Radio one day, explained to me how she would manage only what’s on top of her inbox. It’s all she had time for. The important items were taken care of. Less important issues moved to the bottom They mostly took care of themselves. That stuck with me — you need to look objectively at what really needs your attention, and let the other things go.”

How has the growth of Direct Response/Performance Marketing has contributed to Lockard & Wechsler’s incredible success?

There are very few scalable channels in the digital world — even today. There’s primarily Search and Facebook. Many companies that launch businesses on primarily those two platforms often hit scalability barriers; the more money they put into them, the less efficient their campaign becomes.  Now, they’re all looking to DRTV.  If you use broadcast effectively, you create awareness and demand that accelerates everything you’re doing digitally. So, the more people who do digital, the more they come to respect direct marketing and appreciate what we do.”

“And with COVID, any resistance to online communication and purchase that ever existed immediately went away; it was the only way people could buy and communicate. Five years of evolution took place in five minutes. Retail isn’t going away — it just has to reinvent itself. So really, it’s been a ‘right place, right time’ thing for us.”

How has your team adapted to the challenges of working remote and continued to thrive?

With a few exceptions, their entire organization has been remote since early March. And while they still don’t know what the future of the workplace will look like for their team, the transition to remote has kept pace with their growth as they’ve hired and trained 15 new members since the shutdown.

“I think we have a tremendous opportunity to reinvent the physical workspace and elevate it above the tactical execution that normally goes on there. When I started the company in Manhattan, I was spending 2.5 hours a day commuting. One day, after seeing some offices for rent in Irvington, I made the decision to move there. It was 10 minutes from my house. All of a sudden, I had almost three more hours a day in the office than I had previously. It’s not surprising, but that’s when things took off.

“People are more productive not spending the time and energy commuting — it’s a chore! So, our challenge will be to make it rewarding and desirable to come back to the office? This is an opportunity to make the office a learning center, where people come and share meaningful exchanges. The intimate energy you get from being together in-person is just impossible to replicate in a virtual environment.”

And during the height of the pandemic, where coming to the office wasn’t an option, Lockard & Wechsler adapted with new and different ways to communicate — which was especially helpful for the new hires.  “One of the things we did and will continue to do is have morning get-togethers. We set up meet and greets for the new team members using Google Hangout, where they were able to get to know all the other departments. It helped spark the right conversations; new employees could ask for help with something, and people really jumped in. We’re being forced to think differently on ways to bring people together. We may not be able to have events like our annual Halloween parade and lunch or get dressed up together for the holidays, but we’re trying to figure out what we can do to still make our company special and present.”

“The other thing we just did was implementing a software called Igloo. It allows our company to have a personalized and customized digital presence with the LWD company page, news, file sharing, media planning, even email. It’s the hub of the company. It’s a very positive step for us because it adds a third dimension to an otherwise flat experience. We’re looking at incorporating other communication tools that emphasize mobile as well, but one step at a time for now.”

How has DR changed over the years? What do you think is in store for the future?

In response to how DR has changed over the years, Dick’s response is simply: “it hasn’t” But instead, what he says has changed is the ability to analyze and optimize faster than ever before. “The complexity of the channels has also changed. When you use phone numbers and promo codes on direct mail pieces, TV, and radio as the only means, you had an absolute imperial data set to use to analyze your success — you could code every variable. You can’t do that anymore because consumer behavior is so different. While maybe a handful of respondents will go right to site, most will search first and do research, seeking more info than the commercial or ad that drove them there provided before making a purchase.

“At Lockard & Wechsler, we’ve fortunately developed a very effective attribution model, and every time we use it, it improves our results. We know it’s moving us in the right direction, and this is going to guide us to improve our ability to accurately interpret and react to results.

“I also feel there is a belief that AI is the solution to everything. Some people even think media buying decisions should be driven by AI, but the problem is that this assumes every variable is a constant and doesn’t take consumer sentiment into account. And every variable changes every minute. Not every commercial that runs on CNN at 7:30pm on Tuesday is going to deliver the same audience.

“The challenge is resisting the temptation of having an easy solution, but not overcomplicating the data. It’s basic math. You spend so much on media, you have a certain response rate, and those respondents have a certain value based on their actions — it’s really a simple division! I mean, I haven’t taken a math course since college, but now I‘m running one of the largest privately owned direct marketing agencies in the world. I know all the math I need to.”